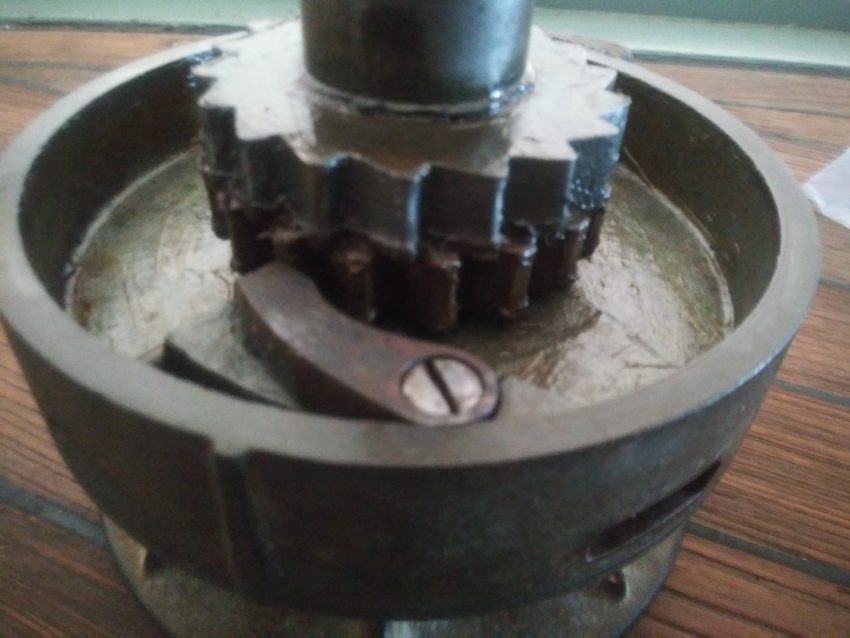 The windlass has a problem. Peter told me about it when I bought the boat. Both Donny (another former owner) and Peter warned me to try and fix it before I went cruising this season. As the anchor is being retrieved the gears often slip. This makes getting the anchor up difficult. I had the same problem while bring the boat home, but thought it was my inexperience with the windlass. Time to take it apart. The lower vertical breaker pawl isn’t in great shape. Portions at the bottom are broken where the spring inserts into the pawl and the spring doesn’t look particularly good but it appears to work. The upper, horizontal pawl (the one that stops the gears slipping when retrieving the anchor) is in good condition but covered in grease. This pawl didn’t have a spring.

I took the horizontal pawl home cleaned it and began looking for a spring that would fit. I had no luck. Maybe it never had one? Back at the boat I put it in and sure enough it never had one. It drops in place by gravity. Now with the pawl cleaned it dropped onto the gears and held, even though the gears were covered with grease.

Then I realized that perhaps this windlass wasn’t meant to be greased. Or least not all of it. The horizontal pawl doesn’t drop consistently and allows the gears to slip. This, maybe caused by all the grease?

It doesn’t seem likely that you would grease a part then also oil it. The windlass has three oiling ports at the top with copper tubes leading down into the body of the windlass to the shaft and gears. The oil is gravity feed.

So, I going to completely clean out all the grease. Insert a small wire into the oil tubes to make sure they are clear.  I’ll buy some ½” square steel stock and make a new vertical breaker pawl and buy a new spring.

One last thing, this model of windlass had a plate attached (which is no longer there) next to the clutch and chain gypsy, it said in large letters aft to forward HEAVE, FREE, BREAK. You would set the pointer on the clutch to the one you wanted and bingo, but this clutch doesn’t stay in place, it rotates slowly with the gypsy as you crank it. Too much grease?

I hope this works. It’s ninety years old and except for a spring and simple pawl in good condition.

The other job was installing the new Lantern/Name boards. This was a long job, but I’m satisfied, and the lights work. Below next to the door you can see I’ve removed the wood grabrail. I’ve just finished cutting the brass tubing and grinding the ends to making a new brass grabrail that will fit. I want to varnish the door frame before installing it.