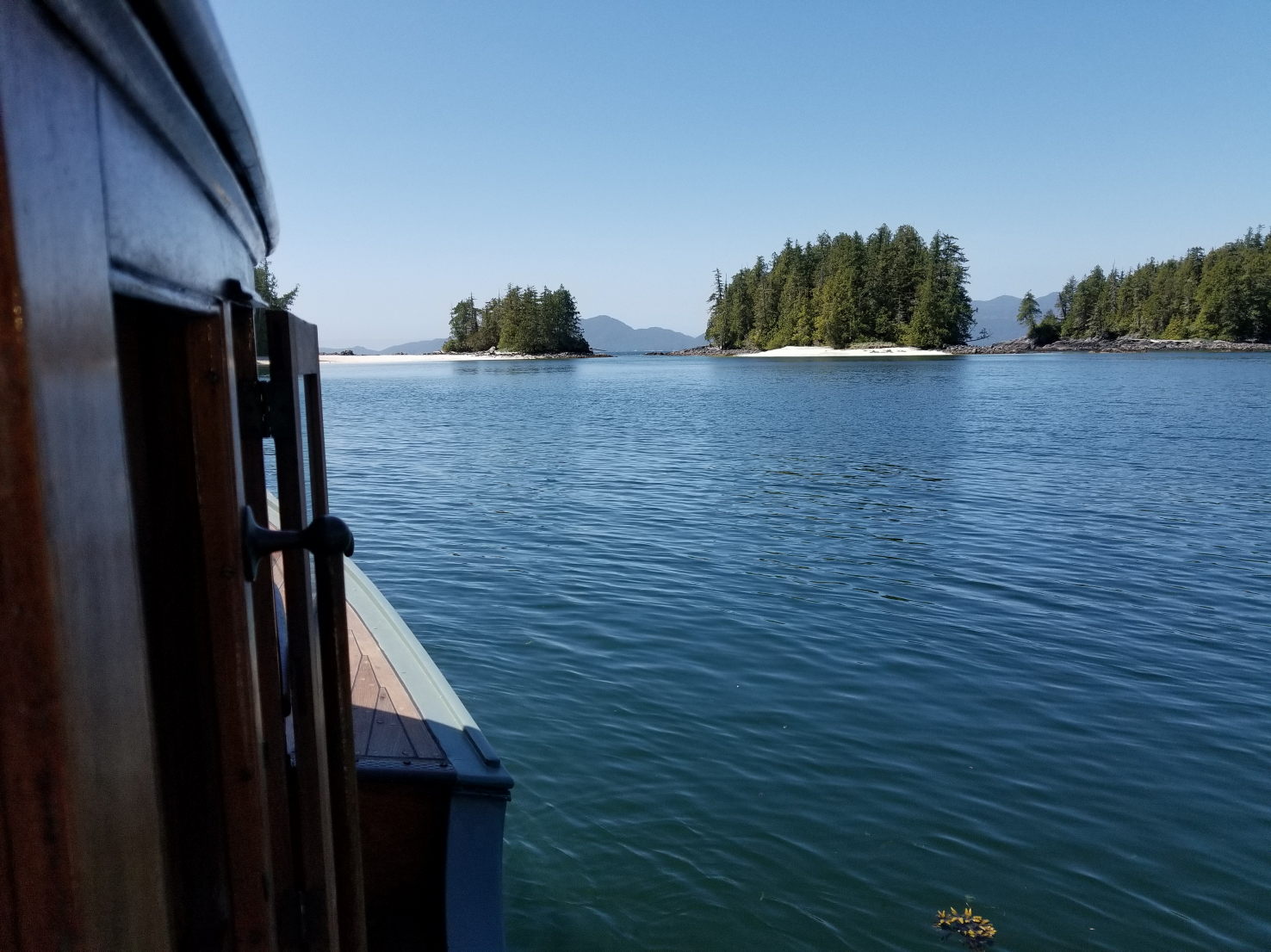 Ben arrived last night. He quickly got himself settled into the boat. He is taking up the make-shift birth in the wheel house. Its not surprising that a 40’ boat can handle 4 people aboard. What is a nice surprise with Merva is that there can be 3 distinct sleeping spaces. 2 in the salon, 1 in the wheel house and 1 in the bow. Its much more compartmentalised than modern cruising boat of its length.

Ben and I awoke around 4:40 and we were quickly underway. Matt and Lukas both knew that they were able to sleep-in until a shift on helm was needed. We left Port Hardy and headed for Fury Cove. Being on the open ocean means being keenly aware of the sea conditions and the capabilities of the boat. Merva was not built for open ocean so modest seas is a must. We were fortunate that the very morning we wanted to leave was the start of a weather window. Waiting a day in Port Hardy would have given us even better weather but we took the early departure (forecast: 1m swells, 10-15 knot wind, diminishing over the next 36 hrs). The boat moored next to us (more sea worthy than ours) had been waiting a week to cross – they had even tried a few days earlier but turned back. They left soon after us. It was nice to know they were nearby.

The tides are very large at the moment. Our plan was to leave early so we can have the tide flowing with us for most of the passage.

We headed for Pine Island (as most do) but along the way I noticed a nice gap – a possible opportunity to find calmer seas behind the rocks leading to Pine Island and Pine Island itself. We headed for Storm Islands and then up Europa Pass. Ben checked the charts and we made the change. As we turned to starboard I looked back and there were 4 cruise liners bearing down on us. I suppose they were happy to see us get out of the way.

We spotted some harbour seals. It was odd to see the birds happily floating in the messy sea as we, in this large boat, gripped the wheel ever tighter.

We altered course again, slightly, to avoid an underwater rock. We were guessing where the rock was when suddenly a wave crashed over something to our port. Found it!

The water was a bit messy as we headed through the rocks and islands – it was clear that the tide was colliding with more stationary waters. Our speed was 7-9 knots (normally 6+) so we knew we were riding some tidal current.

We passed the outer tip of Storm Islands and entered the open ocean. Very soon after we found ourselves in large swells – much larger than 1m. The water was otherwise settled as there was no wind. Lucky as Merva was really getting a good test. Merva’s bow was burried more than a few times! The best thing was that the seas were on our bow the whole crossing.

The swell gradually settled. Somehow Matt and Lukas remained in the salon for the worst of it. I am not sure how their stomachs put up with it as it is much better to see the ocean and even better to actually be on the helm. They eventually came to the wheel house. Lukas was not feeling well so he took some Gravel. I think everyone had a queesy stomach. Lukas and Matt started taking turns on the helm. Lukas knew to follow the navigation line (course) on the chart plotter but did so a little too dillgently and we got broadsided pretty good. Stuff flew off of shelves as the boat rocked up/down and now side-to-side. I stuck my head out the window and threw up (even though I had been feeling ok). The boat settled and I felt even better than before. I decided to take the helm. Matt, Ben and I had the helm for the rest of the passage.

Our friends on the other boat in Port Hardy caught up to us about this time. They came close because they were concerned we may be sinking. Merva does not have a high profile so we were, almost, disappearing in the swells. They soon realized we were ok. They took some photos. I wish we had photos of Merva going through the rougher stuff.

We were passing the southern tip of Calvert Island when we spotted a massive whale tail straight ahead of us. I guess it was setting up for a dive. Unfortunately; we did not see it again. Still – pretty exciting.

We arrived in Fury Cove at noon. Our friends had already dropped anchor and were settling in (Ben was able to get copies of their photos of Merva). We dropped anchor and launched the tender. Lukas made a pancake lunch and I did cleanup. Matt, Ben and Lukas went to shore (nice beach) and I settled in for a nap. I awoke some hours later to find that Lukas was on Merva programming, Matt and Ben were off fishing with the tender and several other boats were coming and going.

Ben and Matt returned in the late evening (just before dark). They caught many fish but none worth keeping. Ben and Matt made dinner (steak, crab, potato salad) and did the cleanup. It was 22:00 by the time we were done. Ben showed me some really nice video he captured using his drone.

And we all went to sleep.

The following images were taken by our friends as they passed crossing Cape Caution. This is after we passed the worst of it (where the ebb hit the static ocean). 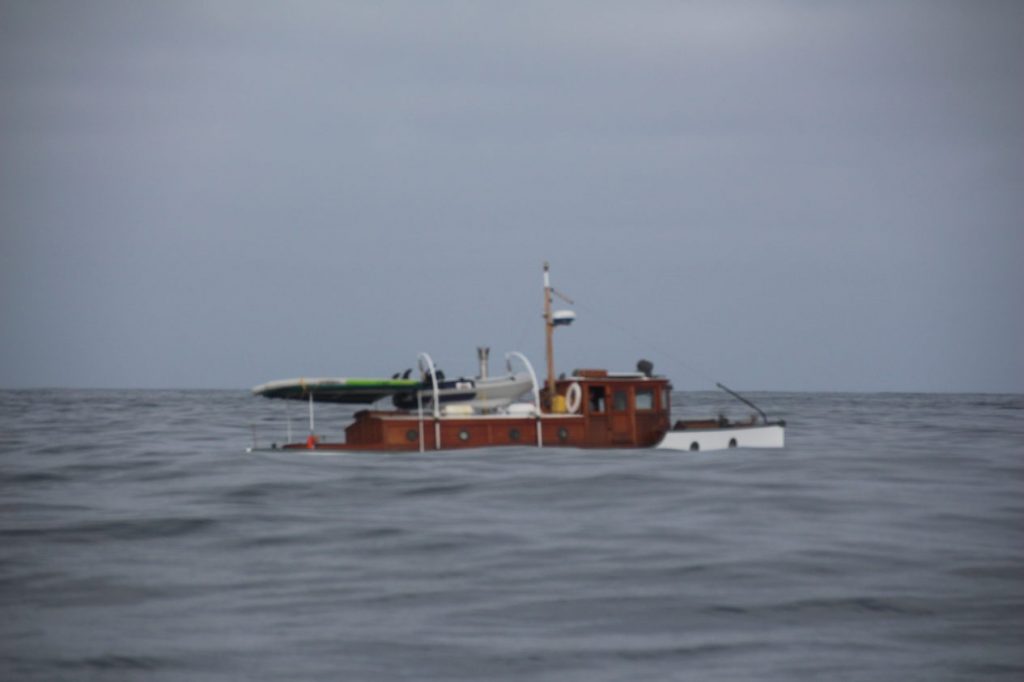 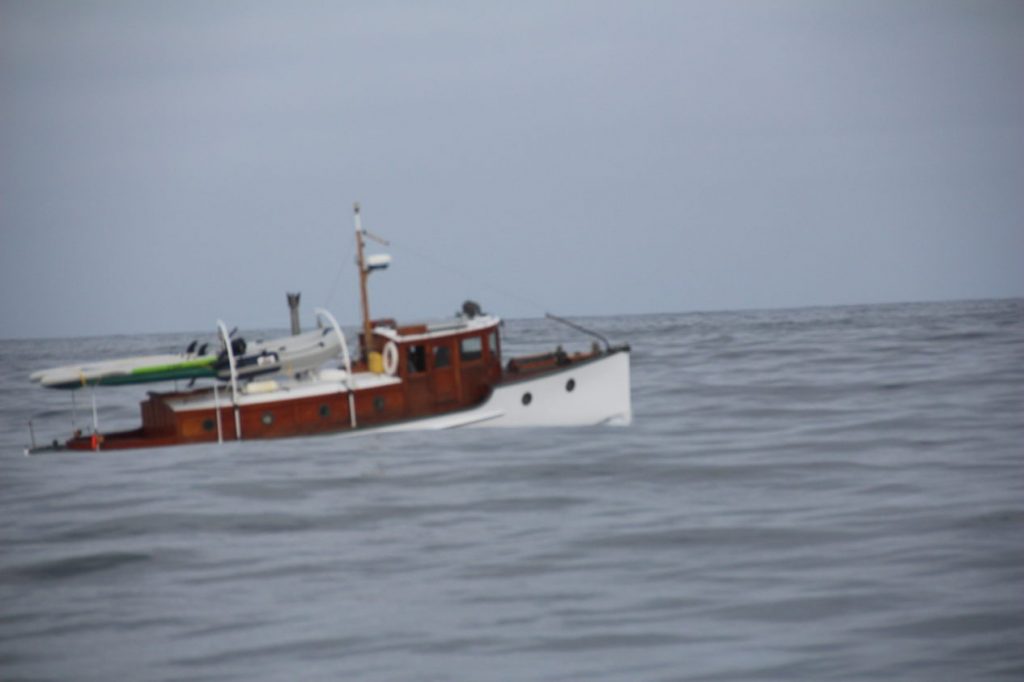 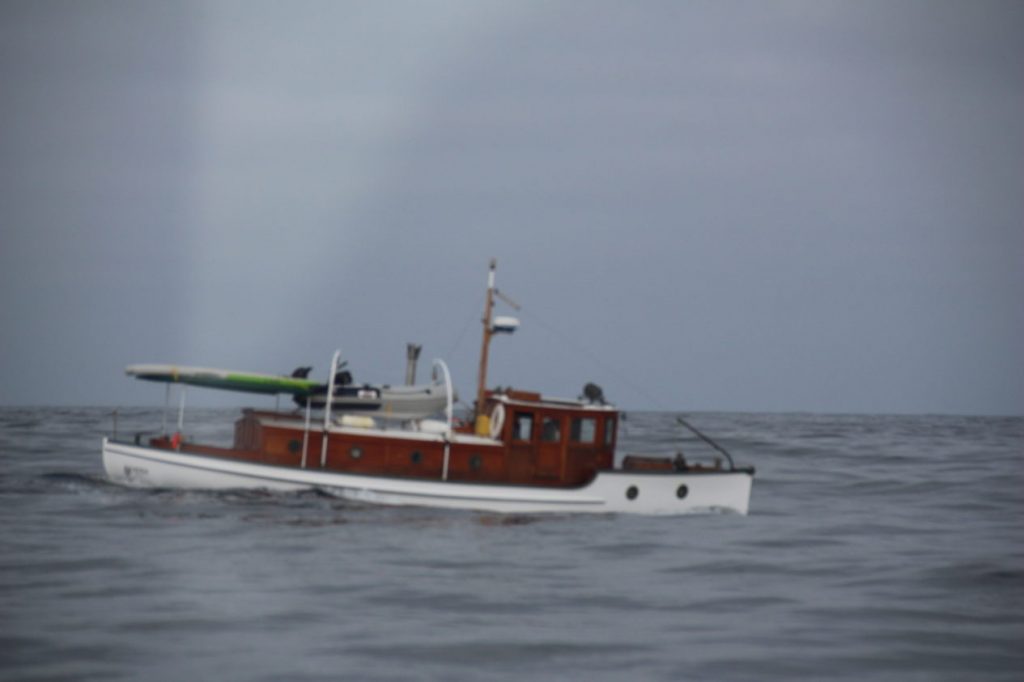 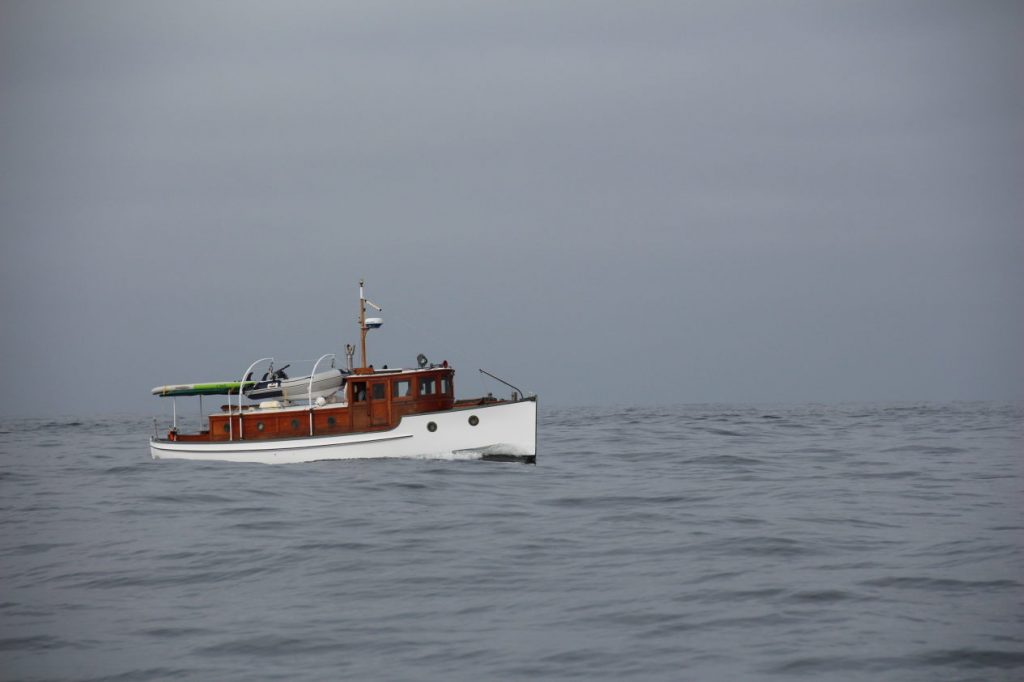